Shopify is the world’s best platform to create your ecommerce store without hiring any professional.

Everyone who uses shopify is a happy customer but the only thing which makes them disappoint is to show “Powered by Shopify” in the footer of your e-commerce store.

A common reason behind this powered by shopify is, using free shopify themes. And most of the newbies don’t want to invest in premium shopify themes in starting of their online store.

In this article, I will show you how to remove powered by shopify from your site in 3 minutes or less.

It’s not that much difficult to remove.

What does “Powered by Shopify” mean?

Powered by Shopify is the logo that appears in your site footer to indicate that you are using Shopify.

It is a trademark of Shopify.

And it insert a link to shopify official website from your shopify store.

Although it doesn’t impact anything on shopify store performance but if I consider the point of ecommerce seo of your shopify store then it’s not a good sign.

Because it’s giving a backlink to shopify and it’s not a good idea to show backlink from your site.

Another point is, it affects the brand image of your shopify store.

And if you have powered by shopify in your site footer then it will be visible to the customer that you are using free themes of shopify and not paying attention towards seo optimization of your online store.

So if you are using shopify, then you should remove powered by shopify from your site.

How To Remove Powered by Shopify?

If you have a doubt on how simple or difficult this task is, then you should not worry about this.

But keep in mind that it completely depends on your shopify theme, technical knowledge and how familiar you are with shopify user dashboard.

The process I am showing here generally works with all shopify stores but it could differ with different themes and their codes.

It can be done with two methods-

Let’s see each method below-

Step-1: First you should login to your shopify dashboard.

Step-2: In the admin dashboard of your store, go through online store (left sidebar) > themes

Step-4: Now, in the search bar type “powered” and you should get the search results instantly.

Step-5: In the search results of filter box, you can see the section “Powered by Shopify”. In the input field of this section, just type a single space and press the save button.

Step-6: Similarly, in the “Powered by Shopify HTML” box, remove the default text and put a single space and press the save button in the top right corner on your screen.

It will remove the “Powered by Shopify” from your password page of your shopify store.

So the job is done successfully and easily.

Let’s see the alternative method to do the same job.

Step-1: First you should login to your shopify dashboard.

Step-2: In the admin dashboard of your store, go through online store (left sidebar) > themes

Step-6: Now delete all the {{ powered_by_link }} code from the footer.liquid file.

Step-7: Click save button after removing all of them to save the changes in the shopify theme of your store.

Step-8: Repeat the same process in password-footer.liquid file to removed powered by shopify text from password page of your store.

The footer of your store is now free from the default text of powered by shopify and shopify link too.

Now enjoy better branding of your shopify store without showing powered by shopify.

This tutorial has explained how to remove powered by shopify text from your store’s footer and password page of your shopify store.

This is the easiest way I can suggest to remove powered by shopify text from your store’s footer and password page of your shopify store.

I hopeyou have understood this tutorial properly. 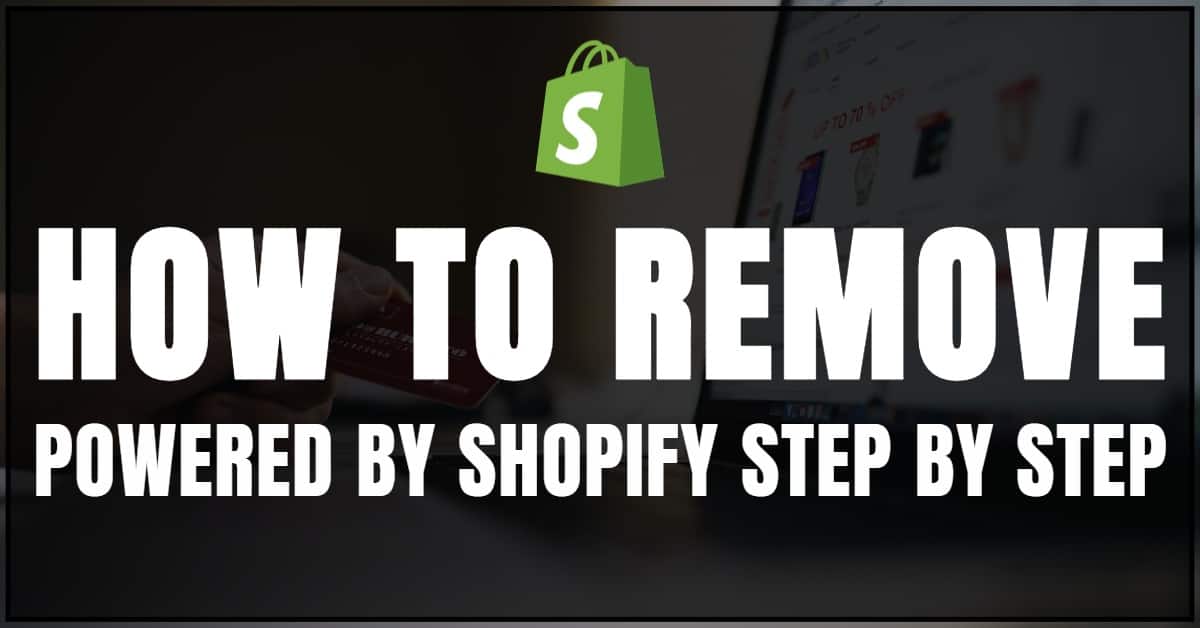 Siddharth Pal is a full-time ecom entrepreneur, author, and public speaker.
He is the founder, writer, and content strategist behind Monk Marketers.
With over 4 years of ecommerce successful experience, he helped countless aspiring ecom beginners achieve their dream of building a profitable ecommerce business.